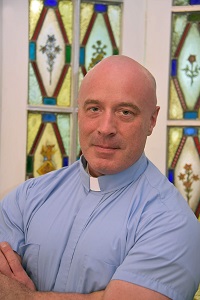 Fr. Brendan A Fitzgerald was born September 10, 1973 in Rockaway, New York to Esther and Denis Fitzgerald, both natives of County Kerry, Ireland. His mom hails from Killarney and his dad from Knocknagashel. Fr. Fitzgerald has four brothers, John, Kevin, Denis and Pio. He and his twin brother, Denis, being the third born.

His parents have the greatest love and appreciation for the United States and the life it has given them, and also a great love and affection for their native Ireland. They wished to share that affection for Ireland with their sons and so made the decision to give their children the advantage of growing up in both worlds by going to school in Ireland and spending summers and vacation time back in Rockaway, the Irish Riviera.

After completing his high school education at St. Brendan’s College, Killarney, Fr. Fitzgerald entered Maynooth Seminary, County Kildare, to begin his formation for the priesthood. In 1995 he graduated with a B.A. honors in history. He then spent a pastoral year which included living and working with Mother Theresa in Calcutta. Fr. Fitzgerald then went on to continue his academic formation in Rome, Italy and graduated with a Masters in Theology. He continued with further studies in Fordham University, New York where he received a Masters and an A.P.D. in Education.

Fr. Fitzgerald was ordained in September 2000 in St. John’s Cathedral, Limerick. He spent his first year of priesthood in Meelick, County Clare. He was then appointed as Diocesan Advisor for Education for the Diocese of Limerick. Fr. Fitzgerald held this position for five years before returning to his native New York to work as a Parochial Vicar in Saint Barnabas Parish the Bronx, from 2006 to 2009. He then spent a brief period as Parochial Vicar at St. Margaret of Cortona, Riverdale, before being appointed as priest secretary to His Eminence Edward Cardinal Egan. In September 2012, Fr. Fitzgerald was appointed as Pastor of Regina Coeli, Hyde Park, New York.